How could I have done that better?

Like creativity, learning, and becoming better at something is an incremental process — bit by bit. You learn one thing, and that sparks questions, more curiosity, and you dive a little deeper.

You begin to uncover edges you never knew existed.

Once you’ve done something, ask yourself, “how could I have done that better?” Even if you only find one little thing, that would make it better, right? Then, what happened if you found one other little thing? And on and on. Incremental changes, over time, add up to significant change and improvement.

Take my podcast, for example. I don’t script it. I just wing it. Should I script it? Probably. How would that make it better? It would likely eliminate how often I say “um” because my brain would be working so hard to think about the next thing I need to say while I’m saying something else. But, maybe first, I’ll focus more on just pausing instead of saying “um” as I organize my next thought.

Learning is a Marathon, Not a Sprint

Too often, when we’re trying to learn something, we want to know it all right away. We take a course but are too impatient for it to play out. We want it all in a 30-minute session.

That’s not how learning happens. If you learn without reflection, you’ll never see the edges. You’ll never get any more in-depth than the superficial aspects that everyone ends up knowing. You never can create change because you’re still on the rails and going where they take you, not where you take yourself.

Would you want to be a train or a Jeep? I’m a Jeep. Give me road, dirt, sand, snow, or mud. Not locked into rails.

When we attempt to stretch ourselves, it’s uncomfortable. It can be like driving in snow. We want to go fast, but know we need to take it slow. We know that we could end up in a ditch. But the thing to remember is that no one stays in that ditch. They get pulled back out onto the road and continue their journey.

They ended up in the ditch because they went right up to the edge of what was a controllable speed but went too far.

That allows you to offer a new perspective. One that others may not have thought about.

Embrace the unknown. Stretch yourself. Go to the edge of what’s comfortable and then push it a little further.

Then rinse and repeat. That’s how you grow. That’s what makes life interesting. 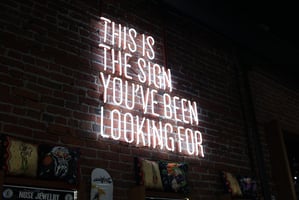 Everything You Do is Branding

This title isn’t just meant to get your attention or pique your curiosity. It’s an assertion I...

What Do Brand Line Extensions Have to Do with Your Career?

You may be asking, what are line extensions? Well, the next time you go to the grocery store or...